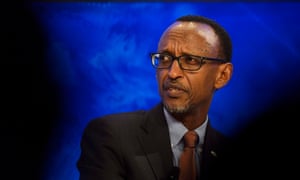 Fidel Castro, Vladimir Putin and Paul Kagame are postcolonial dictators. Their grave human rights abuses are often excused or overlooked by supporters who venerate their defiant opposition to western imperialism. Kagame is an exemplar of this breed, for he even wins broad admiration in the west. There is credible evidence of massacres by Kagame’s forces of tens or hundreds of thousands of people after Rwanda’s 1994 genocide, and his political opponents are almost all in exile, in prison or dead.

Yet Kagame heads several prestigious UN development initiatives. Harvard and Yale invite him to speak about democracy and human rights. It is even fashionable to celebrate Kagame’s leadership of Rwanda. The extent of this hypocrisy is an indication not of Kagame’s dictatorial achievements or crimes, but rather of the world’s hunger for postcolonial leaders and narratives. Kagame is held up as a counter to western hegemony.

Kagame is expert in crafting postcolonial myths that resonate powerfully in a world still grappling with colonial legacies. He claims he ended Rwanda’s genocide, which killed nearly a million people in just 100 days, while a morally bankrupt west stood idle. There is merit in his argument that the world should be held accountable for not deploying peacekeepers during the genocide. However, genocide survivors are afraid to mention that Kagame had himself opposed the deployment of those UN peacekeepers. He was concerned they would interfere with his military takeover of the country.

Kagame claims to stand up to western imperialism, though he is himself a stark example of it. Elected in rigged polls applauded by the west, his government relies on western funding and military support to maintain power – the very definition of imperialism. Such ironies are lost in popular narratives of Kagame.

Those who support Rwanda’s leader are responding to a genuine need in our world for postcolonial leaders who will help the so-called “third world” break free of the debilitating imperial discourses so eloquently described by scholars such as Edward Said, Homi Bhabha and Gayatri Spivak. And the crimes of these authoritarian regimes are no secret: Rwanda’s history textbooks also position Kagame in such terms, placing him among alleged good military leaders such as Castro and Muammar Gaddafi. However, in choosing as our postcolonial symbols oppressive leaders such as Kagame, we do ourselves and all colonised nations a disservice. We make a mockery of lives and families laid waste by these leaders, and we deepen the very inequalities that we seek to redress.

Anjan Sundaram is the author of Bad News: Last Journalists in a Dictatorship and a PhD candidate in postcolonial journalism at the University of East Anglia

On May 3rd, we honored journalists who defend democratic ideals through their commitment to discovering and telling the truth. In doing so, we also paid tribute journalism itself, a profession to that is essential to good governance and the functioning of democracy. This is a critically important time to acknowledge the contributions of journalists. As the Committee to Protect Journalists recently reported, this is the “most deadly and dangerous period for journalists in recent history.” From violent extremists and criminal gangs who abduct and kill reporters to authoritarian governments that persecute them, press freedom is under attack.

The most common reason journalists are targeted, of course, is to limit and control the free flow of information and ideas. Censorship gives power to dictators and tyrants; it allows them to mask the truth, to propagate false narratives that play to their self-serving interests. That’s what’s happening in places like Syria, where those in power, and the extremists present there, want nothing to stand in the way of their ability to distort the truth.

But journalists aren’t just under attack in war zones. In Paris, journalists and cartoonists were murdered for exercising their right to free expression. In China, journalists continue to suffer surveillance, censorship, and detainment. In Russia, the government has expanded its control over the media and prosecuted bloggers for failing to conform to its increasingly strict definition of “legitimate views.”

At the State Department, we’ve launched the Free the Press campaign, highlighting individual journalists who remain wrongly imprisoned. The list includes Gao Yu, a 71-year-old Chinese journalist, who was sentenced to seven years for allegedly leaking state secrets to foreign media; Mazen Darwish, who remains imprisoned by the Asad regime for trying to expose the regime’s brutal atrocities; Ta Phong Tan, who is serving a 10-year sentence in Vietnam for unmasking government corruption; and Reeyot Alemu, who was imprisoned in Ethiopia for writing an article critical of her government.

US Dept of State