Western donors must also encourage Kagame to engage the diverse political views of the Rwandan diaspora.

In her article, “Rwanda don’t let the good trump the bad”, Prof Susan Thomson advises ways through which Kagame can be dealt with:

There was no doubting that Paul Kagame’s Rwandan Patriotic Front (RPF) would handily win September’s parliamentary elections, which it did with 76% of the vote. His party has ruled the country since July 1994, when it successfully ended the genocide of more than 500,000 ethnic Tutsi. In theory, the RPF was contending with nine other parties. In practice, Rwanda’s nearly six million voters had little choice on the ballot. A total of 98% of the votes went to the RPF and its four coalition parties. The additional five parties were not allowed to participate.

Once-cozy relations with donors have begun to sour because of Rwanda’s increasing authoritarianism at home as well as its continued involvement in neighboring eastern Congo.  The United Nations has systematically documented war crimes and other violations of international law by both the Rwandan army and its Congolese proxies. Since 2009, the RPF has worked with American and British public relations firms whose primary task is to drown out the voices of foreign critics and bury evidence of the RPF’s human rights abuses at home and in the Congo under rosy language about stability, economic growth, and commitments to help the poor. A democratic façade is essential to reassure foreign investors and Western donors that their money is being stewarded well.

This raises the question of how Rwanda’s donors can best work with the incumbent president, mindful that Kagame is constitutionally mandated to step down in 2017 with the next round of scheduled presidential elections. Rwanda’s main donors, notably the United States, the United Kingdom, and the European Union, must continue to nudge the RPF towards a real democratic opening. This must include more than the usual calls for free and fair elections or symbolic stoppages of their foreign aid, such as the Americans’ recent suspension of $200,000 in military aid due to Rwanda’s sponsorship of the now-defunct M23 proxy rebel group.

Rwanda’s influential friends—such as Britain’s Tony Blair and America’s Bill Clinton—must stop extolling president Kagame’s performance on economic policies so that they may hold his RPF government accountable for its lack of political freedoms and human rights abuses. Cutting aid in symbolic amounts will not result in policy changes, but conditioning aid could. Rwanda depends on foreign aid, which currently accounts for more than 40% of its budget. General support for the budget must be withheld until President Kagame demonstrates a sincere willingness to give his political opponents more space and adopts policies that reflect rather than exploit rural realities.

Donors must first evaluate the government’s ability to manage its only natural resources—people and land. The U.S. State Department estimates that by 2020, Rwanda will be home to some 13 million people. This will be the highest population density in Africa, with 225 people per square mile. Some 80 percent of Rwandans seek out their existence as subsistence farmers, living on less that $1.50 a day. The government requires rural farmers to grow coffee and tea instead of the crops they need to feed their families. A new land policy has decreased peasant holdings to less than half an acre, which is far from enough to produce crops for subsistence. International donors can withhold their general support to Rwanda’s budget to press for more equitable land and agricultural policies.

Rwanda’s donors can also encourage open dialogue and a culture of constructive criticism and debate of government policies amongst the political class. Foreigners write most of the academic and policy literature on Rwanda, because Kagame does not allow for thoughtful analysis that is remotely critical of his government’s current policies. Western donors can use their already-existing relationship with Rwanda’s Ministry of Education and other institutions of higher learning to sponsor and protect intellectuals whose ideas differ from those of the government as a way to spur openness and dialogue.

Western donors must also encourage Kagame to engage the diverse political views of the Rwandan diaspora. This is not to suggest that he reach out to those who claim that the RPF organized and implemented the genocide, or hold other extremist views. But he does need to acknowledge that sincere dissidents exist alongside political extremists. Kagame should not be allowed to lump together the good with the bad as a way to justify not including any outside or competing opinions in the Rwandan political sphere.

Without an open political sphere nudged and nurtured along by Rwanda’s Western donors, there will few other potential leaders to succeed Kagame in 2017; his rivals have died, are jailed, or have fled the country. Expect the lack of qualified political leaders to be Kagame’s rationale for amending the constitution to allow him to run for a third term.

Susan Thomson is assistant professor of peace and conflict studies at Colgate University. She has published articles in African Affairs, The International Journal of Transitional Justice and The Journal of Modern African Studies. She is also author of “Whispering Truth to Power: Everyday Resistance to Reconciliation in Postgenocide Rwanda” (Wisconsin UP, 2013). 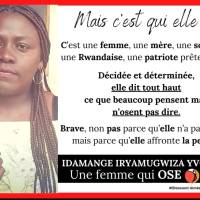