Women line up at the Kanungu Health Centre IV in Uganda to receive HIV and cervical cancer counselling and testing.

As the international community pauses on World Cancer Day to remember the millions of preventable deaths caused by the disease, the head of the UN agency that contributes nuclear techniques to fight cancer said today that a huge percentage of the world’s cancer deaths occurring in developing countries can be prevented.

“The goal must be equitable access for all patients, in all countries, to the highest standards of cancer care, regardless of their country’s level of development,” said Yukiya Amano, Director General of the UN Atomic Energy Agency (IAEA).

“Around 70 percent of the world’s cancer deaths occur in developing countries. Many of those deaths could be prevented if the right facilities, and trained staff, were available,” he told an IAEA-hosted event in Vienna, Austria, marking World Cancer Day to demonstrate that cancer control is ‘Not Beyond Us’ – slogan of this year’s campaign.

To mark the occasion of World Cancer Day, which is marked each year on 4 February, the IAEA’s Programme of Action for Cancer Therapy (PACT) hosted a roundtable panel discussion with notable speakers from around the world to address some of the issues regarding comprehensive cancer control in developing countries.

IAEA also focused on the growing problem of cancer in Afghanistan.

“Like in most developing countries around the whole world, cancer is a growing problem in Afghanistan saidthe agency in a news release describing how it is helping the country to establish a cancer care centre with in-patient and out-patient facilities that include oncology services.

The first and second phases of the project will focus on the population of Kabul and the area surrounding the capital, which is estimated to benefit millions of people.

The IAEA, best known for its work as a the UN nuclear watchdog, said it has been working for decades with a global network of partners such as the UN World Health Organization (WHO) to help countries establish comprehensive cancer control programmes that cover diagnosis, treatment and palliative care.

According to the Geneva-based World Health Organization (WHO), there are 14 million new cases of cancer and over 8 million people die from cancer every year, with 60 per cent of deaths in Africa, Asia and Central and South America.

This year, WHO held a Twitter chat with its cancer expert as part of its activities to raise awareness, and shined the spotlight to recall that tobacco is the single biggest cause of cancer in the world and the leading cause of preventable deaths.

“Every year, 8.2 million people die from cancer; at least 1.6 million or 20% of these are tobacco-related. In total, more than 6 million people will die this year from tobacco-related diseases including cardiovascular diseases, chronic lung diseases and cancer,” wrote Dr. Vera Luiza da Costa e Silva, Head of the Convention Secretariat, Framework Convention on Tobacco Control.

She noted that “televisions, billboards and magazines were covered in advertisements glorifying smoking. Concerts and sporting events were places for the tobacco industry to hand out free products and branded promotional items.

“On World Cancer Day, we must recommit to further reduce tobacco use so that a tobacco-free world becomes a reality,” she said.

And the Pan American Health Organization (PAHO) said nearly half of cancer deaths in the Americas are premature, yet many could be prevented by public policies that support healthy lifestyles and early detection and treatment.

World Cancer Day, organized by the Union for International Cancer Control is an opportunity to highlight the wide range of actions needed to effectively prevent, treat and control the many forms of cancer. 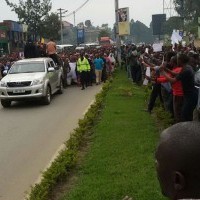