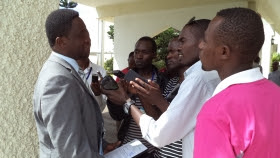 The Democratic Green Party of Rwanda has today, the 3rd of June 2015, filed a lawsuit to the Supreme Court, demanding the Court to Block Parliament from any future plans of changing the constitution, specifically, regarding the lifting of presidential term limits from the Constitution.

Article 101 of the constitution stipulates that:

‘The President of the Republic is elected for a term of seven years renewable only once.

Under no circumstances shall a person hold the office of President of Republic for more than two terms’.

DGPR strongly believes that Article 193, concerning amendments to the Constitution, does not allow the change of term limits from the stated two (2) to any other number.

The Article only allows a reduction or an increase on the lengths of the term of office, which in this case is seven (7) years. This can be reduced to either five or be increased from seven to any other number for example eight (8).

Article, 193, clearly states that, ‘ …if the constitutional amendment concerns the term of the President of the Republic…., the amendment must be passed by referendum….’ This article, clarifies that, the concerned term of office for the President, is the one ofseven years and not any other thing else.

The Democratic Green Party of Rwanda demands the Supreme Court:

The Democratic Green Party of Rwanda was officially launched on 14th August 2009 as an opposition party. It got official registration on 9th August 2013 and accepted as a member of the National Consultative Forum of Political Organisations in Rwanda on 3rd April 2014.

DGPR’s Status were published in the official gazette of the Republic of Rwanda on 4th August 2014.